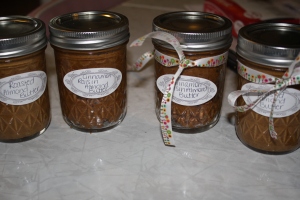 I have a new obsession.  These are AMAZING.

These homemade almond butters were the first things that I made with my food processor that I got for Christmas.

I bought a huge bag of almonds from Sam’s Club and immediately began making these when I got home.

I couldn’t believe how easy they were to make and how delicious they were!  I made a set for me and a set for my mom (that’s why some of them have ribbons on them).

These butters are great spread on crackers, celery, fruit, or sandwiches…anywhere you would use peanut butter.  But, let’s be real, I ate most of mine straight from the jar with a spoon.

They both had very different consistencies, but I loved them both.  In fact, I just polished off the last of the cinnamon raisin variety a little bit ago. The roasted almond butter was more thin and oily while the cinnamon raisin was more thick and grainy.  If I had to pick a favorite, it would be the roasted kind, but that’s only if I HAD to pick! 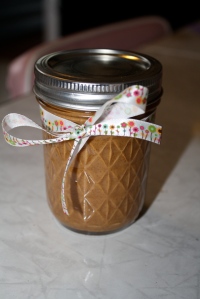 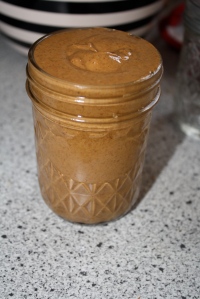 Preheat oven to 350 degrees.  Place 2 cups of raw almonds in single layer on baking sheet.  Roast in oven for 13-15 minutes or until golden brown and you can smell them.  After cooling, pour into food processor.  Pulse into small chunks. Turn on full speed for 7-10 minutes, checking after 7 for consistency.  Scrape down the sides with a rubber spatula every couple of minutes.  For creamier, oilier butter, keep going to 10 minutes or even a couple more. 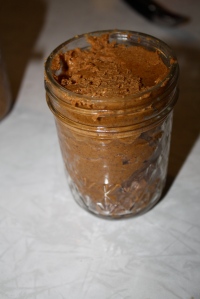 Place roasted almonds in a food processor and process for 10 minutes, occasionally scraping down the sides.

Process until smooth, occasionally scraping down the sides, about 3-5 more minutes.