I love stuffed peppers.  My mom used to make them for dinner occasionally and it was always a big highlight.  She made hers really different than these, though.  These are great, too!

One of the greatest things about these is that they are cooked mostly in a slow cooker.  There is just something so nice about being able to “set it and forget it.”

After all, this is Crocktober and the crock pot needs to be used as much as possible 😉

After they are in the crockpot for a few hours, you do have to bake them in the oven for a bit, but even that is simple.  You just scoop the mixture from the crockpot into the peppers, cover with some salsa and pop in the oven.

Don’t be taken back by the long list on ingredients, they are mostly seasonings and you just have to throw them into the crock pot.  If you don’t want to use all of those seasonings, though, just substitute a pack of taco seasoning for them.  It’s the same thing. 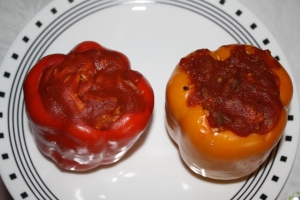 I really like the spicy Mexican flavors that are incorporated into these.  It’s a nice change from the standard Mexican food – tacos. 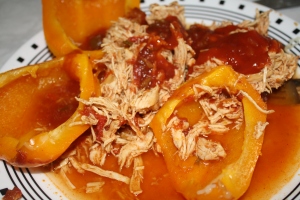 Here’s one of the peppers cut open. It looks like a huge mess, but believe me, they are delicious.

Put whole chicken breasts and all ingredients (except cheese, salsa, and bell peppers) into the slowcooker and set on low for 6-8 hours.

When it’s finished, or at least four hours in, shred chicken using two forks until it’s all complete.  Mix well.

Using a sharp knife, cut the top of the bell peppers off and pull out all the inside ribs and seeds.  Run under cold water to remove remaining seeds inside.

Stuff peppers with chicken mixture, cover with some salsa so they don’t dry out and bake at 350 degrees for 20 minutes or until pepper is soft.

Top with shredded cheese and the salsa.

Leave some feedback! :) I thoroughly appreciate any comments left for me and I read each and every one. Thank you! Cancel reply